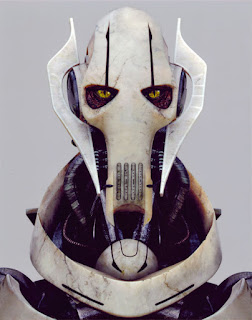 You probably know him, as a ruthless half machine
But let me tell you something, he wasn't always mean.

He was born on Kalee, a planet like our own,
His life was full of battle, it's all he'd ever known.

Grievous learned from his father, to aim and shoot a gun,
"But be careful" his father said, "don't forget you are my son."

When war came and found him, Grievous soon proved his worth,
Just like his father, he was a warrior from birth.

He cut swaths through the enemy, winning fight after fight
And that was enough for Grievous, until he had a dream one night.

Grievous had a vision, he saw a huntress in his mind,
A skilled and beautiful swordsman, she was one-of-a-kind.

And while he had never known her, she was not hard to find,
Soon Grievous found her, as all the stars aligned. 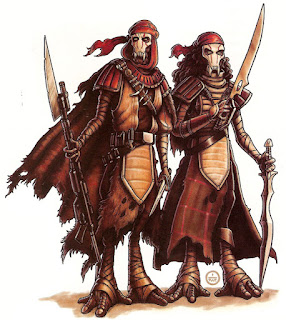 Together they left their enemies, lying in a mess
As they fought side-by-side, they saw success after success.

But just as things seemed as happy as can be,
Tragedy reared its ugly head, on the planet of Kalee.

Grievous' love met her end, on the barbed spears of her foes,
And what happened to her body, nobody rightly knows.

And he did what he could, to hide from his grief,
But any comfort he could find, was very, very brief.

He saw no end to feeling lost, and feared he'd forever be alone,
Even when the war was over, he stuck to what he'd always known.

He became a collections agent, to the soulless banking clan,
They gave him an army, and made him a more dangerous man.

Though in some ways, the violence eased his pain,
Grievous soon found he was feeling sad again.

He decided it was time, to leave his mercenary life,
To seek solace on his planet, away from fighting and the strife.

But the banking clan, you see, couldn't just let him leave,
He simply knew too much, and so a plan they did conceive.

For his flight home, they hid a bomb inside his ship,
That would detonate most surely, at the conclusion of his trip.

But Grievous would survive, of that they made sure,
And for his broken and bruised body, they would find a cure.

Robotic limbs to make him faster, and much stronger too,
And for his mind, these sneaky men, they knew just what to do.

Grievous was of course angry, and wanted to know why,
And that clever banking clan, they blamed the Jedi.

They made Grievous a monster, more machine than alive,
But the freshly made general, was needed for the Clan to survive.

They only forgot one thing, a minor details of sorts,
It would appear that they made him, just a little bit too short.